Water as an fire extinguishing agent

Knowledge and understanding of the physical characteristics of water are essential to becoming a fire protection specialist as it is the single most important aspect of fire protection. The reason water is such an effective extinguishing agent is because of its low cost, effectiveness and general availability. The physical properties of water mean that it is an effective combatant of all three sides of the fire triangle. These sides are the independent entities of oxygen, heat and fuel. 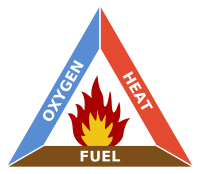 Water is economical, cheaper than non-water based fire suppression agents and much more readily available. It also has very predictable properties. For example:

When water boils at 100oC, it turns to steam at a ratio of 1:1600. So for every unit of water that is boiled, 1600 units of steam will be produced. One litre of water becomes 1.6m3. Water has a specific heat of vaporization of 2.23 x 106J/kg. This means that it can remove that energy from a fire before turning into steam.

It is a well-known fact that water will slow the growth of a fire, and this can be written as a simple equation to illustrate the combustion process.

Examining this relationship, it may be concluded that the control of fire is dependent on the ability to reduce one of the three components required by the combustion process. Water can effectively control all three of these components due to its properties mentioned above. Because water expands so drastically when it turns to steam, the air becomes diluted with steam, which results in the displacement of the oxygen molecules by water vapour molecules. This reduces the amount of oxygen available to the fire and therefore helps to control the combustion process

A study of engineering hydraulics requires a study of the physical laws and principles that might apply to any fluid. For reasons shown earlier, water is the most important fluid in fire protection. Therefore this text will explain the behaviour of water at rest and in motion.

Water has the chemical formula H2O and has a molecular weight of approximately 18 grams per mole. This equates to a density of 1000kg/m3 although this density varies slightly with temperature and pressure as shown in the table below:

However, the changes in density are sufficiently small over the temperature and pressure ranges most commonly encountered to allow deviations from 1000kg/m3 to be ignored for simplicity. Another factor affecting the density of the water is the level of impurities in the water. For example, saltwater has a density of 1027kg/m3. Again for simplicity, it can be assumed that water is incompressible due to the insignificant changes in density under a large change in pressure.

Another important relative measurement is specific gravity (Sg) which is defined as the ratio of the density of the substance to the density of another. Or,

Water freezes and boils at 0oC and 100oC respectively at standard pressure and temperature, that is at sea level and atmospheric pressure. The boiling and freezing points are affected by pressure as expected. But when water boils, it expands to 1700 times its previous size as mentioned earlier. This is important as the expansion of water as it freezes causes undrained automatic fire sprinkler piping in improperly heated buildings to break, and underground piping not buried deep enough to rupture.